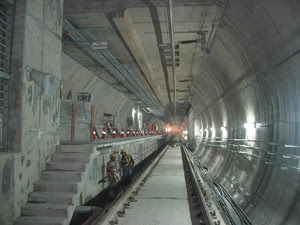 Hopefully, before the commencement of the Commonwealth Games, the initial phases of “metromorphosis” (a term coined by DMRC) of NCR would be complete. Who could have imagined that the capital would one day be flaunting a network of columns, supporting the metro tracks, weaving through the cityscape, connecting remote locations thereby making travel through the city this easy and comfortable? Even a few years earlier this was unthinkable. Our residential area was one of the first to be connected by the Metro. During the construction, it used to be our favourite leisure time activity to stand by the main road and watch the yellow-helmeted labourers and engineers work day and night to install the massive construct (just a 5 to 7 minutes walk from my flat). How the monstrous machines, the rubbles, the cemented and metallic parts of the structure had become common fixtures of the landscape! How a thick layer of dust and smoke hung in the atmosphere permanently to be dissipated only after the construction was over! How our flats vibrated in the night, as though under virtual earthquake, when the underground diggings took place to fit in the columns! How the numbered columns were transported and lay by the road to be painstakingly put up to hold the track in its horizontal stance! How the cranes picked up each cemented cup to fit it to perfection to form the base of the track! How we used to wonder what would happen if suddenly the tube fell off its track, while plying, on to the busy road below, flanked by crowded shops and markets! Conjectures and realism, mixed together, added a new dimension to the paraphernalia. Now, when we find a slightest flaw in the working of the system we crib and complaint. But we have also seen the meticulous planning and back breaking toil that have gone into its making.
When the construction was on, our area was invaded by the yellow helmeted men. Early in the morning, they would come in groups (they had shift duties) with their helmets on and thereafter they would be everywhere. We’d find them cleaning the roads around the construction (including the placards with the logo of DMRC emblazoned on them, put up to barricade the construction site), managing the traffic to avoid unnecessary mishap or mess, working atop the half complete structures and during lunch time resting and relaxing in the MCD parks.
When the trial runs began, we saw the engineers with walkie-talkies running up and down the station building to ensure smooth coordination. At that time it was peak summer and the temperature neared 45degrees and some days even more. But still these dedicated souls worked undaunted and how they stuck to their deadlines was amazing given the way things work in our country!
That is how in our locality and I am sure in other places too the mammoth task of instituting the Metro was completed, part by part, phase by phase.
.
Contd……
With the advent of metro, the metamorphosis of the Capital or for that matter the NCR that has taken place or “metromorphosis” as DMRC calls it, is an important chapter of the history of the city/region. We are lucky that this phenomenon is taking place in our lifetime and we are direct witnesses to it. In a place where dependence on private vehicle (be it two or four wheeler) has been constantly on the increase in the past few decades, the Metro has not only provided an alternate means of public transport but also given rise to a commuting culture running parallel to city life. Though, insufficient and transient (being restricted to short bursts of travel), it is a world unto itself.
As we keep witnessing this piece of Capital’s history taking over our lives in an inescapable manner, what best can we do but act as a social commentator to this change agent. Yes, it has brought about lot of changes in the lives of the Capital dwellers. So, I thought, it would make interesting reading to chronicle little incidents and minute details of travel by metro, though mundane, yet which may provide a peek into this world which is at times highly enjoyable and at others equally infuriating.
Puraan was not created in a day. This Puraan will also be lengthy and take its own course and time to be completed - posted in spurts and gushes as the vagaries of metro-life come to the fore,in all its ecstasies and eccentricities. Part I and II may please be considered distinct chapters of this Puraan.
Posted by vanderloost at 06:51